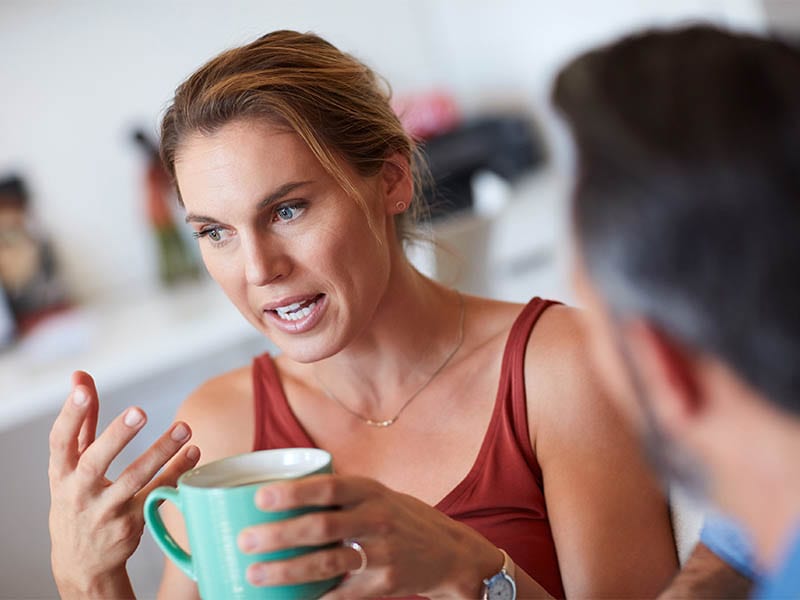 3 Simple Tricks to Improve Communication in Your Relationship in 2020

When people hear the phrase “communication in a relationship,” they often think of it in terms of two people talking openly and freely with one another.

So it might not be a problem of two people not talking to one another. It might be that what they are saying or what someone is hearing is not being translated and comprehended correctly.

So before you assume that you and your partner simply aren’t talking enough, look underneath. There might be something else preventing you from being open, honest, and listening to what they are really saying.

If you feel as you aren’t being heard, then these are great tactics to get your point across. And also, to ensure that what you are trying to convey to your partner, you are.

Often in a relationship that is experiencing problems with communication, there is a fundamental issue. The issue is usually in the way that words are being perceived and not what is actually being said.

If you want your partner to hear what you say, then the way you start the conversation matters. If you have a problem, try to phrase it by taking ownership of your feelings.

When we are upset about something, it is easy to start a conversation by blaming someone for how you feel. If you approach the subject with the word “you,” you are already saying that they did something to cause you to feel a specific way. That might put them on the defense before you even get to say your peace.

Take Ownership of how you Feel

Before you approach your partner, it is best to begin by admitting that you are the one feeling a certain way. And also, not assume that your feelings are warranted by their action. To do this stick purely to “I feel….” statements.

For example, if you begin a conversation by saying, “You really hurt my feelings when you ignored me last night,” right at the start, you are asking your partner to defend their actions.

That will probably immediately put you at odds. If, instead, you begin the statement by saying. “I was really hurt last night, I felt as if ignored me,” you are leaving the door open for the potential that it was just your perception of the situation. You are saying that you felt a certain way, and not laying blame for your emotions on them.

Once you have made the statement of how you feel non-defensively, it becomes much easier to continue. You can follow it by saying, “Can we maybe watch a movie tonight?”.

If you start without accusation, there is a higher likelihood that your partner won’t shut down immediately. If they shut down, it can quickly lead to a fight because you feel as if they didn’t listen.

2. Take Turns Instead of Talking Over Each Other

The minute that emotions begin to rise, it is easy to start to talk over one another. Once you stop the give and take of a relationship, both of you are having an independent conversation with yourself.

Talking to yourself isn’t getting you anywhere, and probably the reason you feel as if your partner isn’t hearing, they aren’t.

And you also aren’t listening when you don’t let each other give a reply and then follow it up with another. The best way to communicate effectively with your partner is to make a statement, then allow the other person the room to express their feelings to it. Once they have stated their side, you then have the floor.

Turn-taking doesn’t always come naturally. It is totally human to want to defend yourself and to shut out the other person’s argument. And most likely, neither of you has any idea that you aren’t listening or hearing.

You are both thinking, “They never listen to me!”. If you know that a conversation might be stressful, a good practice is to grab an item, like a pillow.

The person who begins the conversation expresses their feelings and hands the pillow to the other. After your partner has had the time to answer, they then pass it back to you. And then, you continue to do so until you can resolve whatever you are discussing. It’s incredible how orderly and calm a conversation can go when two people are both talking and listening!

3. Don’t Let Things Build – but do Pick the Right Time and Place

Broaching an uncomfortable subject is never easy, especially for someone who is not good with confrontation. But if you keep things all bottled up, by the time they come out, they explode. The person who has been holding it in appears to be irrational, and their feelings unfounded, regardless.

But you also have to walk a fine line between letting your partner know how you feel without holding it in and knowing the best time to let it out.

There is both a time and a place for having a conversation about things that aren’t comfortable to discuss. Choosing the best time, and not the worst, will have a significant impact on the conversation and how much you hear, as well as how much you listen.

It is never a good idea to have a conversation when you are super angry about something. Off-the-cuff comments come across as accusatory. Statistics say that 93% of communication is heard non verbally. If you approach your partner already upset, visibly with a mad look on your face, extremely animated, and with a loud tone, you will shut them down immediately and put them on the defense.

When that happens, you will not be able to convey how you feel effectively, and they will probably not hear what it is you are trying to say. So it is best to calm down, go for a walk, or put it on the back burner until your anger subsides before you try to have a conversation with your partner.

Choosing the Right Time is Important

In reverse, if you notice that your partner walks through the door visibly upset and agitated, it is probably best if you don’t start right in talking about something that will likely cause high emotion. That DOES not mean that you have to swallow it or not say your peace. It does mean that maybe you wait until their mood is more accepting for your message before you have an emotional conversation.

If you tend to argue a lot, then it might be best to examine how you approach your partner with a problem. Do you hold it in and then just explode with too much emotion over something that is seemingly not worthy? Or, do you usually wait night time when you are both tired, and then start a conversation?

Often, if you start to look at the patterns of how and when you communicate, you will begin to see that something isn’t working. And if it isn’t working and you don’t try to correct it, it can start to feel like you are hitting your head against the wall. Once either or both of you become frustrated with the continual arguing, any conversation will feel exaggerated, and “old” immediately.

How to Communicate Effectively in a Relationship

Communication isn’t always about a lack of things being said; it is typically more about both what is said and what is heard. If you and your partner are having a hard time finding a resolution to your problems through discussion, then try these three simple tricks to open the air and to get both parties both listening and talking.

If you can’t seem to find a way to communicate, however, it might help to seek the guidance of a counselor. They can help work through what might be breaking down the communication in your relationship.